A variety of short films, songs, and stories were presented to the audience, as issues on energy and climate change were highlighted at the Buffalo History Museum on Saturday evening. Some of the important issues and ideas that were touched on included fracking, geothermal, coal and gas.

What drew a huge crowd were the presence of Zephyr Teachout, an Associate Professor of Law, and Josh Fox, an Oscar-Nominated and Emmy-Winning filmmaker and activist. They were both the major attraction for the night, but plenty of other environmentalists were present to spread advice, information and also have a few good laughs with the Buffalo community. 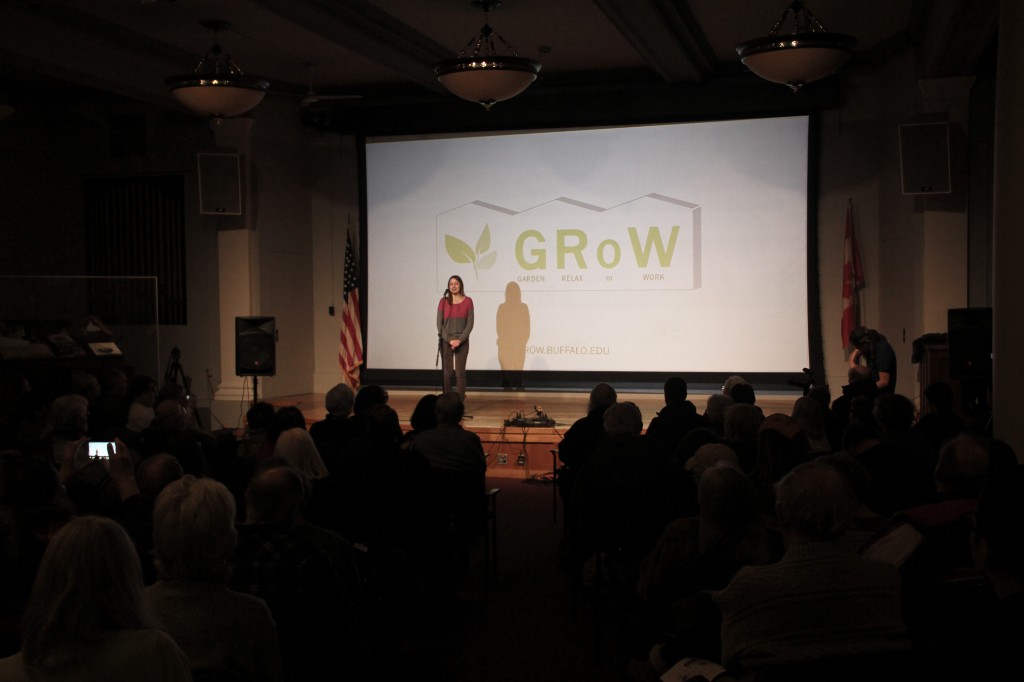 Also making an important presence was GRoW’s very own head of Public Relations, Amanda Mumford, as she represented for the team. Before a short film about GRoW Home was presented to the audience, Mumford enlightened the crowd with her own few words about the project.

“We’re building a house… that’s ultra-efficient, and it has solar panels and geothermal heating systems.” said Mumford. “Basically, we’re trying to build a house that can support, you know, growing your own food and keeping yourself sustainable.”

Posing with the GRoW Home model. -By: Phua Zhi Ting

Fox, personally thought that the GRoW Home seemed “fantastic,” but also hopes that it is “modular” and “affordable” for everyone. He truly believes what “we’re lacking” most in this “type of infrastructure” are affordable homes.

Another aspect focused during the event was on saving energy, especially in electricity consumption. A speaker who was explaining about renewable energy had the crowd agreeing that electricity bills are more difficult to read than html codes. Moreover, Fox touched on this subject as he was explaining to GRoW member, Ivan Chao, on how to attract the Buffalo community’s attention on the GRoW project. 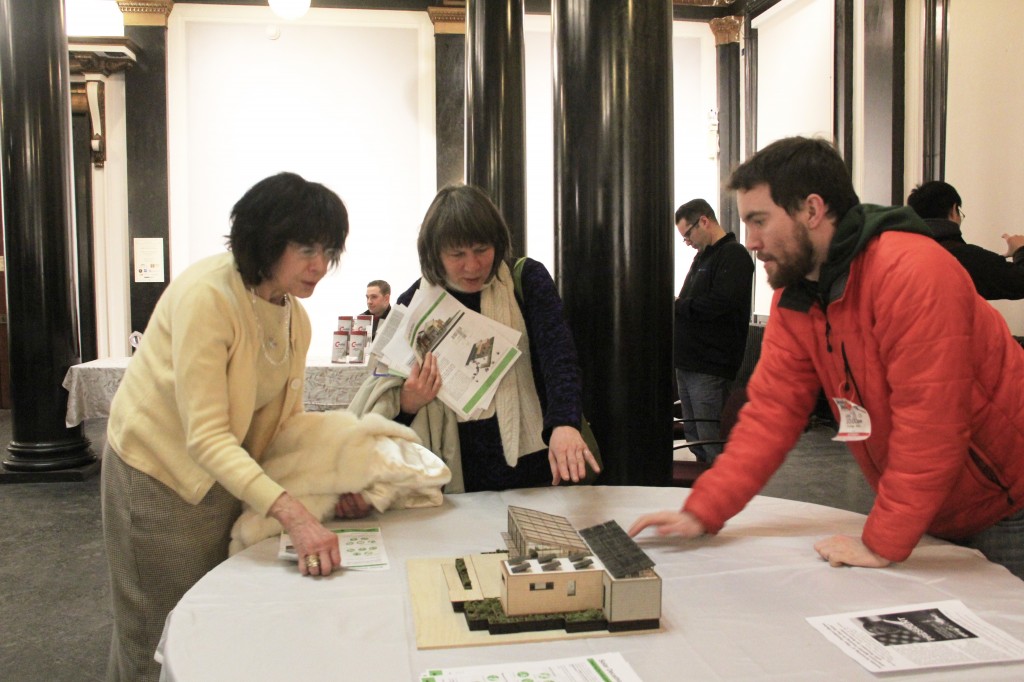 Cristopher Osterhoudt explains how the GRoW Home functions to the public. -By: Phua Zhi TIng

Another big name at the Buffalo History Museum was the Democratic New York State Senator, Antoine Thompson, who was celebrating his 45th birthday. He gave a short talk about battling against oil and gas companies. It was obvious that hopes for a more solar city is on the cards for the Buffalo born politician. Before Thompson left for the night, he strongly admitted the need for “more grassroots advocacy” in order “for a solar city to be successful.” 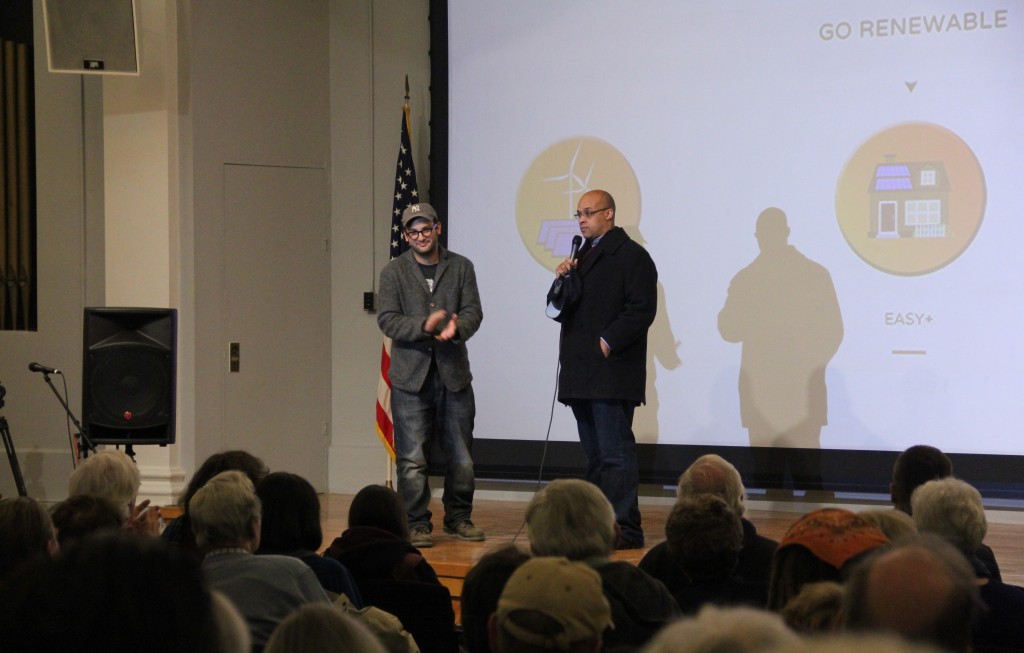 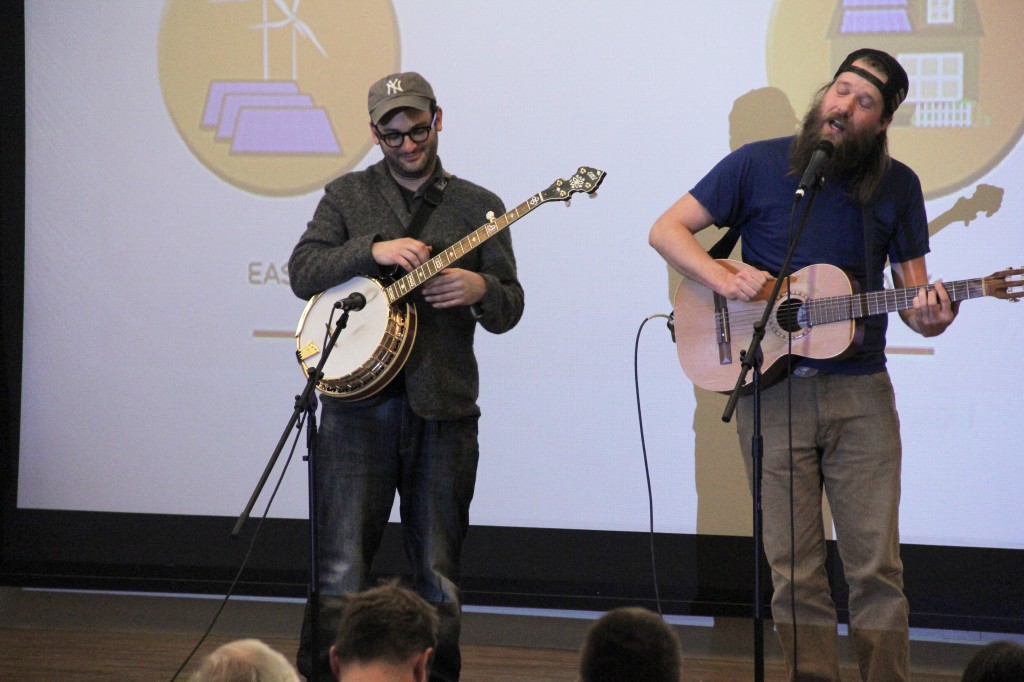 Josh Fox and Dustin Hamman lit up the night with their musical talents. By: Phua Zhi Ting

Furthermore, famous actor and musician, Dustin Hamman – from the band, Run On Sentence – performed live on stage for the audience in attendance. He performed a solo during the first part of his show, and then had Fox perform a duet with him.

The buffalo community continues to display their upmost support for the GRoW team, as many turned up for the Happy Hour at 464 Gallery in Amherst Street on Thursday evening. 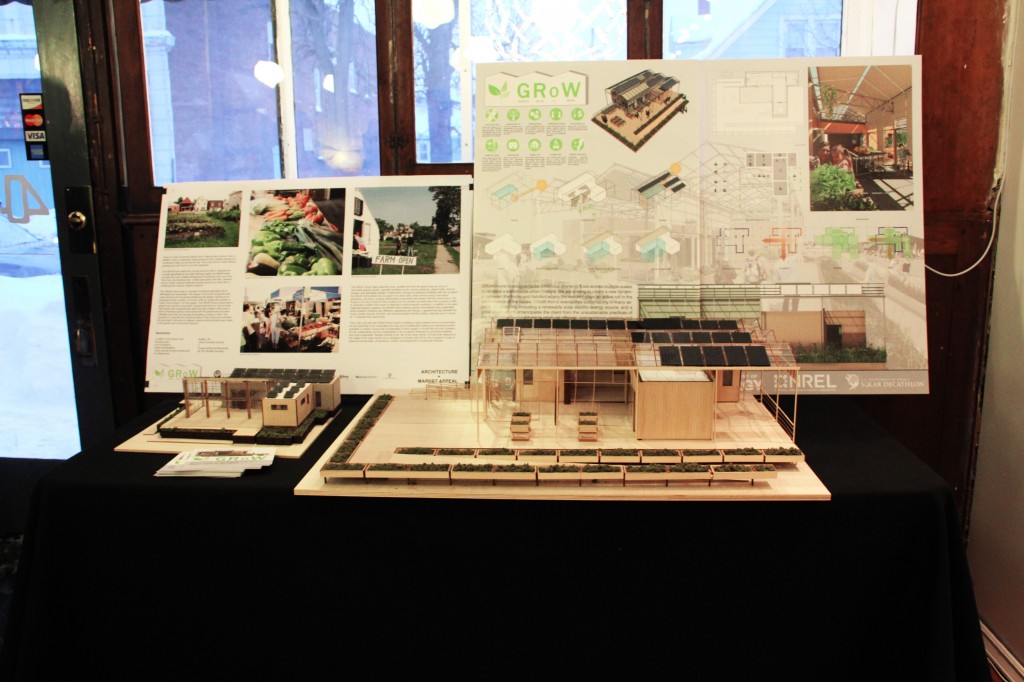 The GRoW Home model was at the center of attention. -By: Phua Zhi Ting 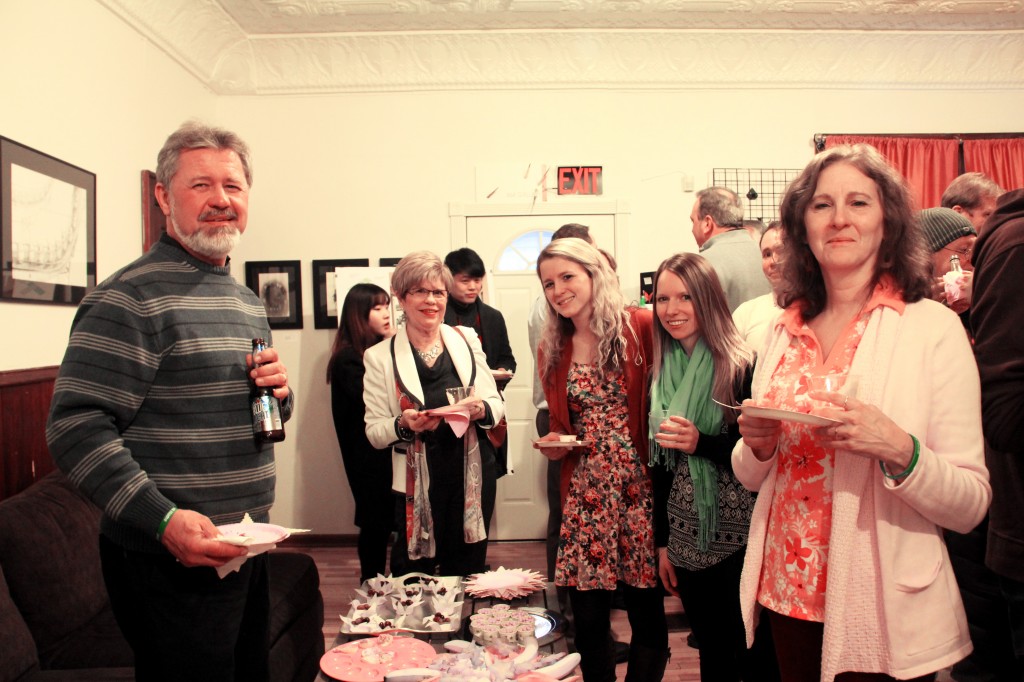 It isn’t every day that someone is generous enough to host a Happy Hour all by themself. However, Susan Chowela, a French Teacher at the North Tonawanda Senior High School, proudly showed her support towards GRoW by hosting the occasion. Chowela admitted her love for “architectural buildings and innovative ideas,” which made her decide that she “wanted to help out” the GRoW team.

“I think it is (GRoW Home) amazing and I want to support local students,” said Chowela. “I want to show them that the local community supports them and hopefully keeps up in our area. You know, we don’t want our talents to go elsewhere. We want to help make Buffalo better.” 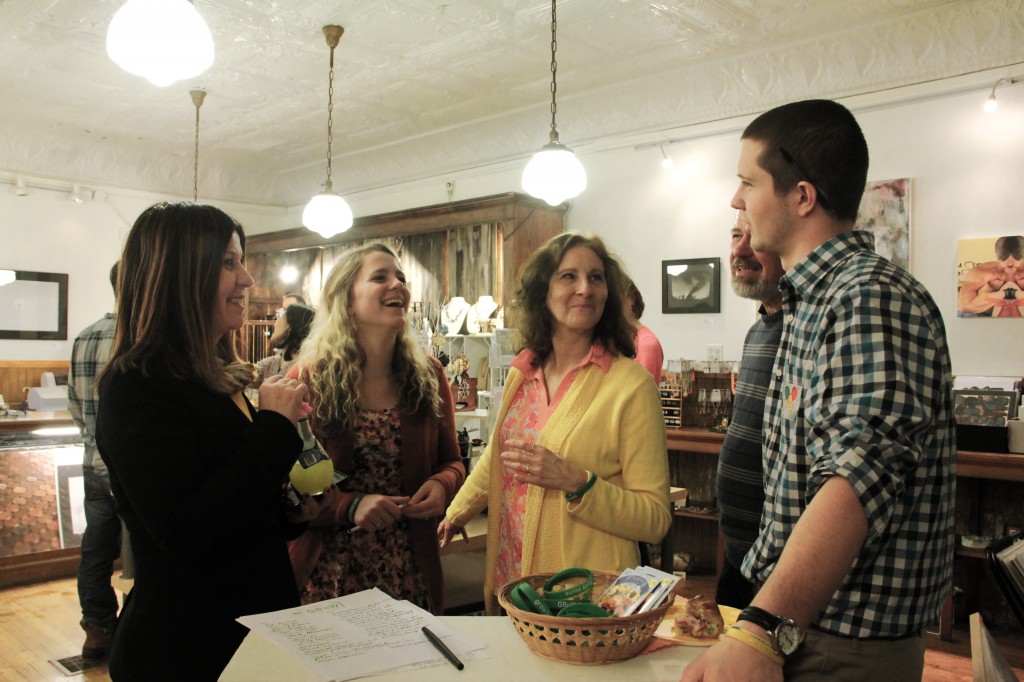 Intrigued by the technology that could someday be possibly made available in the Buffalo area, guests were deep in their own discussion about the GRoW Home’s potential. 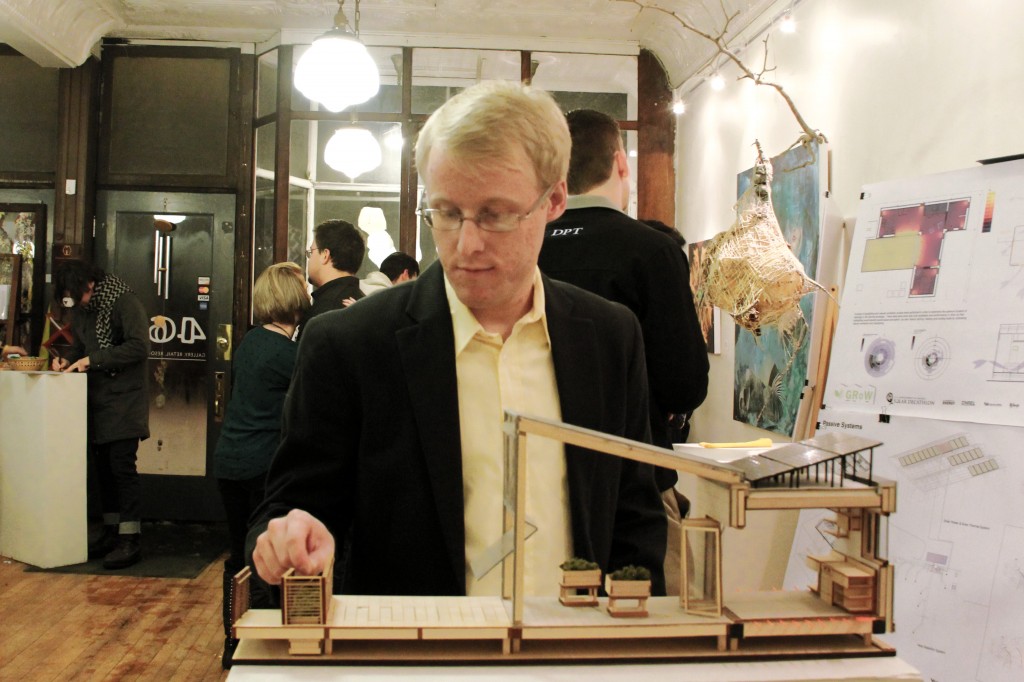 The GRoW Home brings out the best of interests in everyone. -By: Phua Zhi Ting

Steve Delmonte, a cartoonist/humorous illustrator, attended the Happy Hour with his wife. He admitted that the GRoW Home project is “pretty interesting” and that hopefully, it can “stand up to the Buffalo winters.”  More specifically, he looks for the project to promote “farming,” “more natural produce,” and fresher organics to the Buffalo area. Delmonte was in all smiles, as he helped sum up the night as actually “pretty good.” 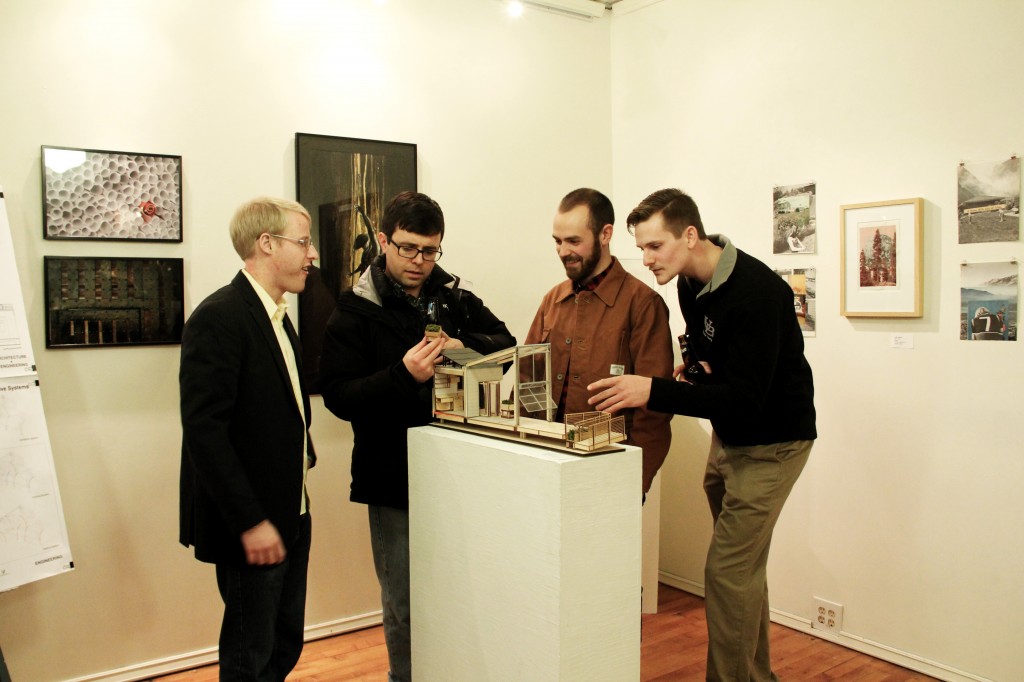 Architectural Project Manager, Duane Warren (Second from right) was happy to discuss about the GRoW project. -By: Phua Zhi Ting 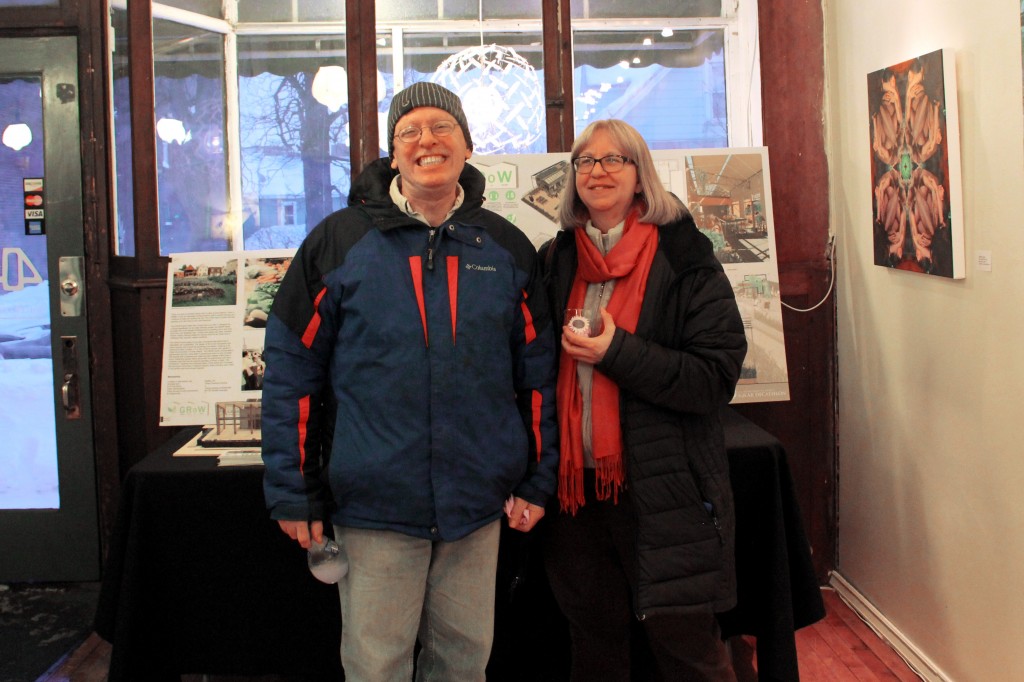 From 4p.m to 9p.m, guests enjoyed the great atmosphere that was present at 464 Gallery. Arts and crafts were in display all over, but most of the attention during the Happy Hour was snatched by the GRoW Home model. The night left more than just filled stomachs and quenched thirsts, but it also managed to educate the Buffalo community more about GRoW as a whole. 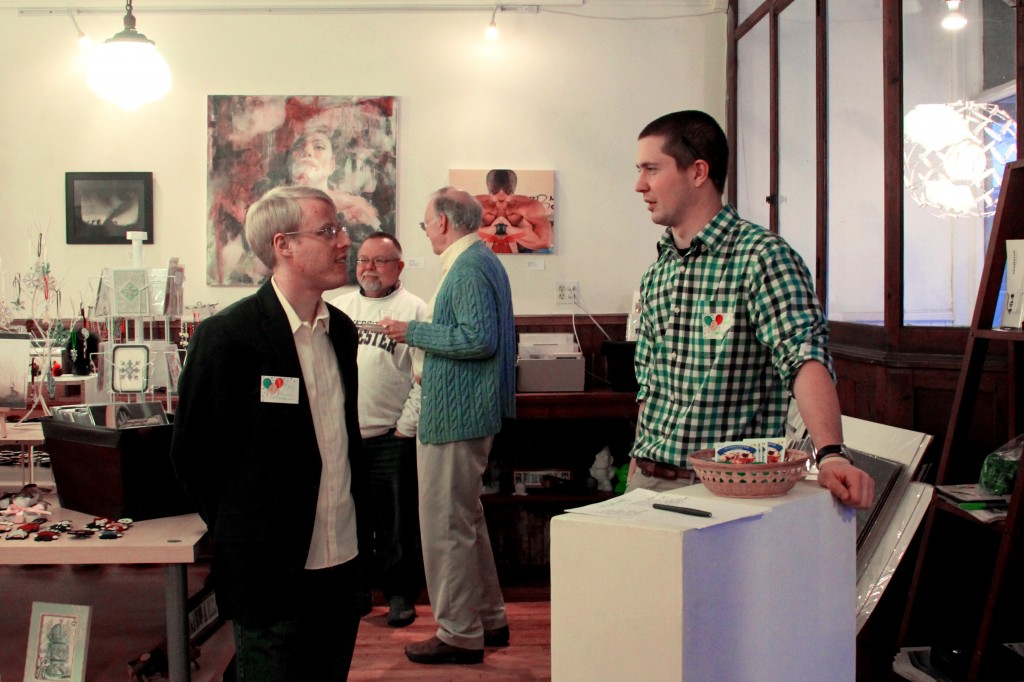 Mike Tuzzo (Right) is the Cost Estimator for GRoW. -By: Phua Zhi TIng

Chowela, personally thought the night went simply “great.” She didn’t really have any expectations on the amount of people attending. But, according to what she saw, it was just the right amount for a truly Happy Hour.

On behalf of the GRoW team, we would like to say thank you to Susan Chowela and those that made this Happy Hour a true success.